More news from Islay – the iconic distillery of Laphroaig have announced the second release in a series of three whiskies which are exclusive to the travel retail sector & Whisky and More; called the QA Cask. This follows on from the PX Cask, which was part matured in ex-Pedro Ximinez sherry casks and was released some months ago. This new whisky has been matured in a combination of ex-bourbon cask and un-charred American oak barrels, which are then married together.

The ‘QA’ in the name refers to Quercus Alba, the Latin name for American oak. 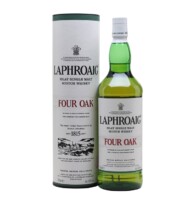